from the Wall Street Journal – 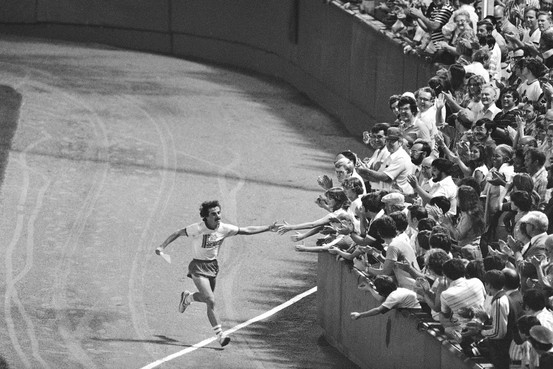 As a 10-mile-a-day runner, Dave McGillivray thought he could eat whatever he wanted without worrying about his heart. “I figured if the furnace was hot enough, it would burn everything,” said McGillivray, who is 59. But a diagnosis six months ago of coronary artery disease shocked McGillivray, a finisher of 130 marathons and several Ironman-distance triathlons. Suddenly he regretted including a chocolate-chip-cookie recipe in his memoir about endurance athletics. “My first reaction was, I was embarrassed,” he said. As race director of the Boston Marathon, McGillivray is a high-profile exhibit in a growing medical case against the devil-may-care diets of many marathoners. Their high-mileage habit tends to lower their weight, blood pressure, heart rate and cholesterol levels, leading them (and sometimes their doctors) to assume their cardiac health is robust regardless of diet. “‘I will run it off’—that attitude clearly prevails among the marathoners themselves, almost sometimes to an arrogance,” said Paul Thompson, a veteran marathoner who is chief of cardiology at Hartford Hospital. A growing body of research shows the error of that thinking. A study published in the current edition of Missouri Medicine found that 50 men who had run at least one marathon a year for 25 years had higher levels of coronary-artery plaque than a control group of sedentary men. A British Medical Journal study published this year compared the carotid arteries of 42 Boston Marathon qualifiers with their much-less active spouses. “We hypothesized that the runners would have a more favourable atherosclerotic risk profile,” says the article. As it turned out, that hypothesis was wrong. A small body of research suggests that heart problems may arise not in spite of extreme-endurance exercise but because of it. That has led some cardiologists to theorize that, beyond a certain point, exercise stops preventing and starts causing heart disease. “Studies support a potential increased risk of coronary artery disease, myocardial fibrosis and sudden cardiac death in marathoners,” Peter McCullough, a Baylor University cardiologist, wrote as lead author of an editorial in the current Missouri Medicine. But many cardiologists are skeptical. “The science establishing a causal link between vigorous exercise and coronary disease is shaky at best,” said Aaron Baggish, a Massachusetts General Hospital cardiologist who does triathlons and marathons. Even so, he said, “I’ve never once told a patient they need to run marathons or race triathlons to maximize health, as this is not accurate.” 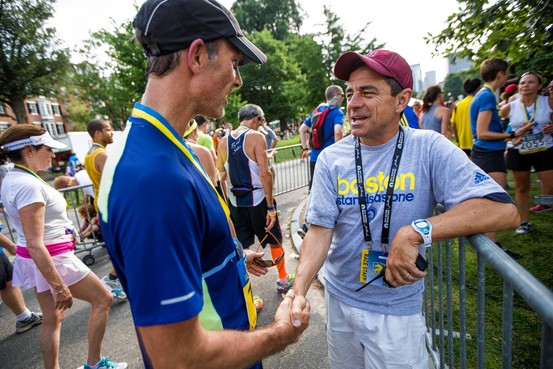 Reports of heart disease in runners are prompting some marathoners to obtain scans of their coronary arteries. Ambrose Burfoot, winner of the 1968 Boston Marathon and editor-at-large of Runner’s World magazine, is 67 years old, 6 feet tall and only 147 pounds. A lifelong vegetarian, he subsists mostly on fruits, vegetables and nuts, though he also eats “cookies and all dairy products—cheeses, ice creams etc.,” he wrote in an email. “Last March I learned that I have a very high coronary calcium,” he said, adding that “I have a condition perhaps similar to Dave McGillivray’s.” The medical profession’s recommendation for such runners depends on which cardiologist they visit. James O’Keefe, a Kansas City cardiologist and ex-triathlete who believes sustained endurance exercise can damage the heart, said he would recommend no more than 20 miles a week at a modest pace. Thompson and Baggish, however, believe that in many cases endurance athletes diagnosed with heart disease can safely continue doing marathons and triathlons, if their conditions are treated. Thompson argues that risk must be weighed against quality of life, an idea the Burfoot embraces. “I subscribe to the old saw: ‘Exercise—it might not add years to your life, but it adds life to your years,'” said Burfoot. But cardiologists are united in their campaign against the old notion that high-calorie workouts confer a free pass to eat anything. Those who run several hours a day often dream about cookies and ice cream. When McGillivray ran from coast to coast in 1978, he tended to finish each day at a Dairy Queen. “It wasn’t just replacing calories but a mental thing—that vanilla shake was my reward,” he said. Replacing thousands of calories with purely nutritious foods can be challenging. Since receiving his diagnosis last October—and radically changing his diet—the 5-foot-4 McGillivray has dropped to 128 pounds from 155, an improvement he celebrates. Far from cutting back his workout regimen, McGillivray has amped it up, boosting his weekly mileage to 70 from about 60. As race director of the Boston Marathon, which is April 21, he plans to continue his tradition of running that course after the last runner has crossed the finish line. And to celebrate turning 60 in August, he plans to complete an Ironman-distance triathlon.

Although McGillivray says that his cardiologist, Baggish, gave him “the green light” for such challenges, Baggish said in an email that, “I do not give patients (Dave included) green or red lights. We engage in an open discussion about known and uncertain risks and benefits and come up with a collective and very individualized plan about what is reasonable. “In Dave’s case,” he added, “we did just this and he is leaning toward doing the (Ironman) with full knowledge of the fact this his risk is elevated compared to the general field.” Some critics say that continuing to engage in endurance athletics despite cardiac disease is evidence of addiction. “I’m not afraid to call myself an exercise addict,” said Burfoot of Runner’s World. “I have always been afraid of dying on a run. But the way I look at it now, it’s not that running will have killed me. Running has enhanced my life immeasurably, but it could also ‘trigger’ a life-ending event that probably would have happened even sooner except for my running.”

Write to Kevin Helliker at kevin.helliker@wsj.com

"On a scale of 1-10, I give a 12 rating. The whole team deserves special recognition and Megan is excellent." --Bozeman Patient's Dad

The Excel Climbing Lab has been utilizing a climbi